Digital Visual Interface (DVI) was developed in 1999 as a convenient interface for the transfer of uncompressed digital video signals. The DVI specification also provides optional compatibility with the VGA interface for analog video.

A DVI connector may have up to 29 pins that transmit signals, although not all pins are used in all cases. There are five different DVI connectors: 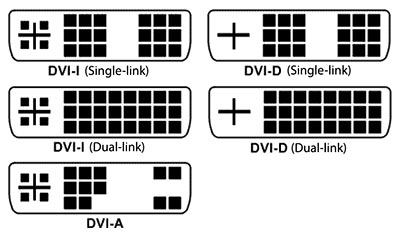 Although DVI was originally developed as a computer interface, became a common connector on many professional electronic devices as well. As outlined above, there are two types of links in the DVI specification to support different resolution requirements, namely single-link and dual-link. Single-link connections can support a maximum pixel rate of 165 MHz for resolutions up to 1920x1200 and 24-bit color. Dual-link connections can support a maximum pixel rate of 330 MHz, and resolutions up to 3840x2400 although the more common resolution is 2560x1600. Dual-link does not mean “dual cables”; both types of link use a single physical DVI connector. The difference lies primarily in the pin count, configuration, and maximum resolutions supported.

There are five different types of HDMI connectors defined by the standard. However, the most common connectors used in AV installations are the Standard (Type A) and Mini (Type C) connectors.

DisplayPort, first approved in 2006, is the newest digital video interface. Developed by the Video Electronics Standards Association (VESA), it has started to replace older standards like DVI and VGA. Unlike DVI and HDMI, which uses TMDS, DisplayPort relies on packetized data transmission, which allows the interface to pass more data (and achieve higher resolutions) on fewer pins. Like HDMI, it can be used to transmit both video and audio. DisplayPort has become a common port on graphics cards, computers, and displays. Apple® adopted a smaller version in 2008, called Mini DisplayPort (or mDP), which is currently available on many Apple and other products. Support for stereo 3D video has also been incorporated into the current standard.

One of the key physical features of the DisplayPort interface is a locking connector that is physically smaller than a DVI connector. Also, DisplayPort uses a single clock frequency, which lowers the cost of transmitters and receivers. DisplayPort HBR3 mode in version 1.3 can support resolutions up to 4K UHD (3840x2160) at 120Hz. It can also directly transmit HDMI, DVI or VGA signals using a simple dongle adapter. While full-bandwidth transmission is limited to about 3 meters of cable length, information can be transmitted up to 33 meters using active cables.

Serial Digital Interface (SDI) is a family of video interfaces defined by the Society of Motion Picture and Television Engineers (SMPTE) in 1993. Its primary applications are in the professional broadcast television industries, although it is also commonly used in live-event production, medical imaging, and other high-end applications. The original SMPTE 259 (SDI) is a serial, one-way protocol that provides data rates of up to 360 Mbps.

Other SMPTE SDI standards with higher bitrates have been introduced and are known as HD-SDI, 3G-SDI, 6G-SDI, and 12G-SDI. The latest standard, SMPTE ST-2083 (24G-SDI) is in development with a proposed bitrate as high as 24 Gbps. All versions of SDI use one or more coaxial cables with BNC connectors and a nominal impedance of 75 ohms.

HDBaseT is the latest innovation in connectivity technology, and it has been adopted by many consumer and professional video electronics manufacturers and installers. The first specifications were finalized in June 2010 with the goal of establishing a new global HD digital connectivity standard.