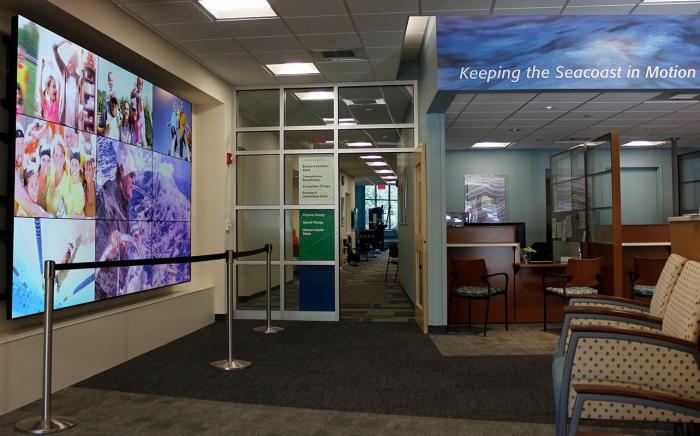 Opened to the public in 2015, the Center for Orthopedics and Movement centralizes several musculoskeletal practices to enhance collaboration and convenience for patients. The team-based center combines Exeter Hospitals offerings with those of Coastal New Hampshire Neurosurgeons and Core Physicians. Together this combines 25 providers who see an average of 270 patients every day. Specialties include orthopedics, sports medicine, rheumatology, neurology, podiatry, physiatry, acupuncture, rehabilitation services, massage therapy, and aquatic rehabilitation.

When the Exeter Hospital Center for Orthopedics and Movement was in need of a cohesive brand campaign to promote its multitude of practices, it engaged the Bennett Group of Boston. The award-winning healthcare marketing and advertising agency began with a research and discovery process to create a name for the new center. Then it translated the idea of movement into the “What Moves You” video, print, and community engagement campaign.

For the moving images component, the highly engaging videos incorporate action shots from various outdoors pursuits enjoyed by New Hampshire’s residents, as well as depictions of active family life. Each video segment was developed to capture the power and energy of movement.

Each of the video wall’s nine screens were utilized in a creative expression of movement. Individual panels flip in unison to create one full-display video, and vice versa. Then the Bennett Agency’s videos are presented on a 2x2 configuration in one corner of the display, with the remaining five surrounding displays showing stills from community life in the region.

Each screen plays a role in the depiction of active life. The video wall, as a whole, delivers a powerful message to patients and visitors on a path to healing and wellness. Soon after the video wall at Exeter Hospital went live in June 2016, the Bennett Group won its fourth consecutive Best of Show prize from the National Healthcare Advertising Awards.

With so many types of care provided in one location, the hospital sought to emphasize the central element of its patient-centric care: movement. To help assert that statement, the lobby video wall greets patients and visitors with information and motivational content from the hospital’s “What Moves You” brand campaign. Rapid visual transitions incorporate video produced by the Bennett Agency, with images submitted by patients on Exeter Hospital’s orthopedics microsite.

Integrated by HB Communications, the video wall is comprised of nine 55-inch Samsung displays fed by the Galileo GO 16 display processor with input from four Visix digital signage players. The system is operated by a touch panel controller.

Full wall sized videos are interspersed with images on individual screens creating a dynamic, moving display wall. The content transitions from images on each of the nine displays, to a single video wall image, and then to a video surrounded by still images from community members.

After one year of use, Exeter Hospital’s information systems support team continues to get positive feedback about the high-quality video presentations and ease of use of the video wall. Especially appreciated is the Galileo display processor’s ability to easily program presets and toggle on and off individual video windows. This makes it easy to refresh and add content around the “What Moves You” video and the community images, to provide brand messaging and information for the facility and its approach to patient care.