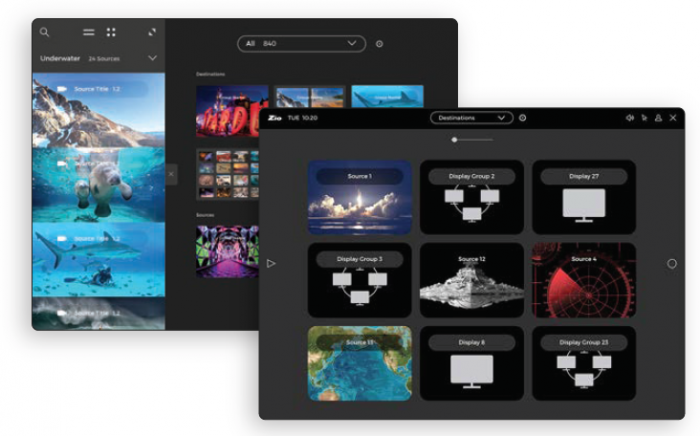 RGB Spectrum’s Zio® system delivers an AV over IP solution with an interface that users love. Our new award-winning AV over IP solution features a GUI designed with convenience in mind. Networked video operation and system control have never been simpler.

After the debut of the Zio system at InfoComm 2016, media and attendees commended its seamless switching and many innovative features, especially its easy-to-use interface. With Zio networked AV, users can preview content in the browser-based interface and use the drag-and-drop capability to send content to one destination or many. You’ll always find the right content quickly and easily with the Zio search tools.

The Zio user interface is purpose-built for expediency and efficiency. Through the GUI, endpoints can be organized into groups to quickly route a video stream to multiple destinations. For example, using the Zio drag-and-drop interface, a professor can easily route a presentation to multiple displays in multiple classrooms simultaneously. In a corporate setting, an executive can debut a company video in selected corporate and field offices at the same time.

It’s simple to see where all of your sources are routed by checking the Zio GUI and looking at the thumbnails. Each encoded source includes a preview of the content – a thumbnail image of each video stream – to help you quickly identify the desired signal. From the browser-based interface, you can also see what each display has routed to it, as well as any presets and “favorites” you have set up.

Presets let users save the routes they frequently use and then recall them with a single button-press or click. This is a real timesaver. For example, in the event of a breaking news story a user can select a preset that routes local news channels to displays in a control room. Any user task can be automated and accessed from the Zio interface, including controlling third-party devices.

You will also find your “favorites” easily in the GUI. Save yourself time by setting the devices, displays, groups, and presets you frequently use as favorites so you can call them up at any time. For instance, if you work in a building with many conference rooms, you can designate the conference room you use most often as a favorite. That way you won’t have to scroll through the full list of conference rooms. This is another example of how navigation is simplified in the Zio GUI.

Zio networked AV can control external systems or be controlled by them. Through the Zio scripting interface, users can control third-party devices, such as IP cameras, projectors, lights, and displays.

The Zio system ensures seamless distribution of video, audio, and control data over an IP network infrastructure. It is built for sources and displays up to 4K resolution. It uses industry-standard 1G or 10G Ethernet switches, with encoders that accept standard HDMI video and audio signals from media players, computers, and other sources at resolutions of up to 4K Ultra HD, and decoders that feed displays up to 4K resolution. Video, audio, and control data are converted to IP packets that can be switched and routed to any location on the network. As system requirements grow, additional endpoints can easily be added. Endpoints are designed to operate over both dedicated and shared networks.

Whether it’s installed at a campus, in a city, or around the world – using LANs, WANs, or even satellite links – the Zio system meets the challenge of networked AV. An intuitive GUI makes video, audio, and control over IP simple and hassle-free.

Experience the Power of the Zio AV over IP System