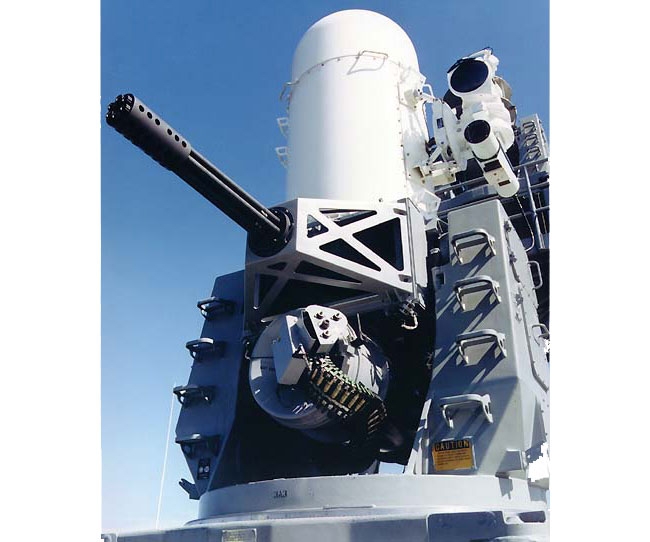 The Phalanx CIWS is a rapid-fire, computer-controlled radar and gun system that provides ships with a "last-chance" defense against anti-ship missiles and other close-in-air and surface threats, including helicopters, surface mines, and terrorist aircraft that have penetrated other fleet defenses. Phalanx is currently installed on all U.S. combatant ships and on those of 20 allied nations.

To accomplish this, a thermal imaging sensor and video-tracker were integrated into the existing Ku band radar suite. "The Phalanx Block 1B control station provides surface mode controls, including the display of the thermal imaging with superimposed system and target data,” observed Mark Roe, Raytheon’s Block 1B Production Manager. “We had to find a solution that would allow the station operator to simultaneously view multiple images from various sources in real-time. RGB Spectrum custom-built a multiple windowing display processor that fulfilled our mission-critical requirements."

Roe further states: "One of the hurdles was overcoming the limited space constraints in the operator console. The system required a space-saving board-level device that would be able to display all of these incoming images on a single console monitor. RGB Spectrum developed the ultra-compact View 7000, a sophisticated multiple window display processor capable of handling both computer and video input sources and supporting the Phalanx system's unique thermal imager input specifications."

RGB Spectrum’s custom-built View 7000 processor combines high resolution computer and FLIR video inputs in real-time. The Phalanx system computer provides the View processor with graphical information comprised of a range table, target-acquisition imagery, weapons control and ordnance data, and system status information displaying searching, tracking, and gun status. The View processor receives video from the thermal imager in a unique 1360 x 422 resolution, combines the various input signals, and resizes them to fit the resolution of the console monitor. Signals are displayed in windows that can be scaled to any size and placed anywhere on the screen.

The View 7000 processor offers RGB Spectrum’s powerful multi-window functionality. These processors accept up to twelve real-time inputs and display them on a single high resolution monitor or projector. Inputs can be NTSC or PAL, composite or S-Video, FLIR, and/or high resolution RGB signals. Each window can be independently positioned, scaled to full screen, overlaid with computer graphics or overlapped with other windows. Additionally, users can pan and zoom within each video image. These display processors are designed for system integration and are available in stand-alone configurations or as VME boards.

"One of the unique benefits that the View 7000 provides in the Phalanx system is its ability to produce progressive scan video from the FLIR video camera with superb results,” Roe further explains. “Its advanced de-interlacing techniques provide excellent vertical resolution and motion characteristics. The View 7000 gives operators the ability to see critical computer data superimposed over the thermal images. This is a powerful visualization tool that improves the efficiency and effectiveness of the Phalanx system operation."

Raytheon Company is a global technology leader in defense, government and commercial electronics, and business and special mission aircraft. Raytheon Company is based in Lexington, MA and can be reached at 502-364-6760 and on the internet at www.raytheon.com.