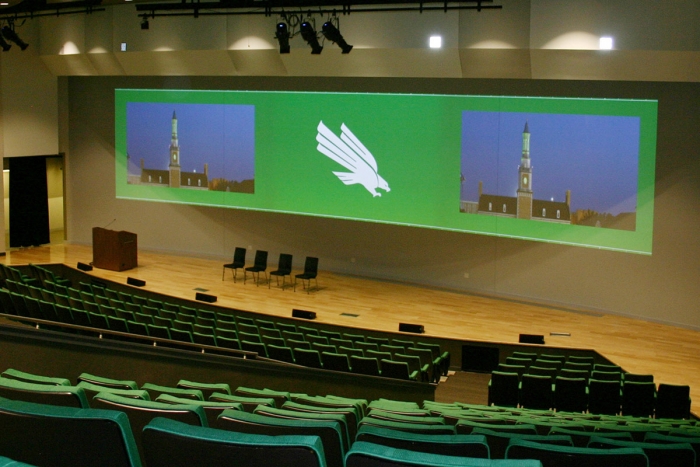 Established in 1890, the University of North Texas (UNT) in Denton is among the nation's top research institutions. It is also one of the country's largest public research universities, serving 37,000 students.

RGB Spectrum's MediaWall® 2900 Display Processor is now front and center at the University Union Lyceum Theater, a 500-person multipurpose auditorium/classroom and meeting space. The Lyceum Theater caters to the university's internal clientele, holding student union events such as new student and parent orientations. The space is also used to host private events. Because the theater operates as a for-profit entity within the public university, the uses of the facility and its audiences vary greatly.

The MediaWall display processor allows for easy placement of source material so that presentation, training, and class materials can be shown anywhere on the screen, a major improvement over the single projector / single image paradigm used in the theater previously. BAI Austin, consulted for UNT and designed the system as a three projector edge blended display that could have several images placed on a full width background image. The architect chose a Screen Goo coated, curved wall behind the theater's stage area, as the display surface. Schoolhouse AV, the integrator, installed the system and worked with the school to take advantage of all of the systems capabilities.

The facility uses three modes of operation via presets. In "cinema" mode, the center projector zooms out and a single video from a Blu-ray player or live camera is shown on the display surface. In "presentation" mode, the two adjacent projectors are managed directly by a matrix switcher to display supporting images. In "wide screen" mode, all three projectors are connected directly to the MediaWall 2900 display processor which handles a number of signals from a variety of sources.

In the "wide screen" mode, a background image of approximately 4896x1080 pixels is generated from a high end Dell PC that has a 4 output HDMI video card which splits up the custom graphic size across 3 of the HDMI outputs. The MediaWall 2900 Screen Grouping feature is used to stitch together 3 HDMI outputs into a full width graphic. This full width graphic may either be used as a slide-by-slide, full width presentation or act as a thematic background upon which up to 5 additional picture-in-picture or PIPs may be displayed over the background. These 5 sources emanate from the AV matrix switcher outputs that can route AV signals from computers, floor box inputs, wall plate inputs and PTZ video cameras. Any of the PIPs may be sized, scaled and positioned anywhere on the entire background. The result is a giant canvas upon which the creativity of the UNT Union Tech Services may be unleashed to complement presentations with high impact image content.

Onsite personnel have given high praise to the system. They rate the image quality and performance as excellent, and they appreciate that the MediaWall display processor is simple to operate.

"Part of the driving force in selecting the MediaWall display processor was that it's HDCP-compliant. Many processors out there are not," said Blair McNair, Director of Operations at Schoolhouse Audio Visual.

"Plus its Web GUI is easy to use and its switching is seamless and clean," he added. He also commended RGB Spectrum's customer service, noting that "unlike other manufacturers, I can get help with a problem even if it's not due to an issue with an RGB Spectrum product. Customer support has been fantastic all along. The companies that provide good support are the companies that get our support!"